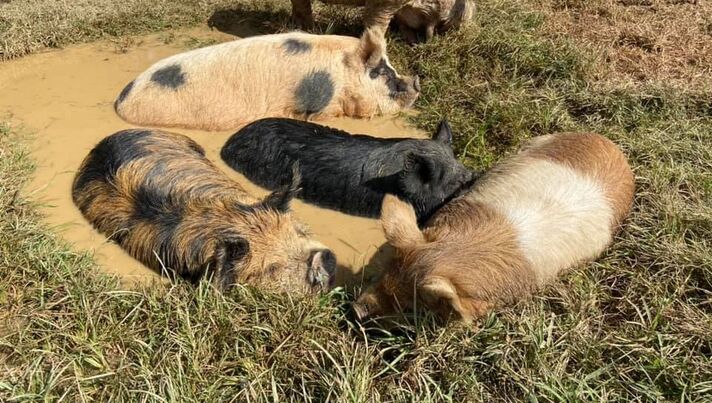 You will notice that our pigs are not overly FAT! Most pig owners/breeders over feed and often feed unhealthy "junk" to their pigs. Yes, they're incredibly round, but that is not in any way a part of our goal for the pigs at Higher Ground. It seems that people have forgotten what healthy looks like, but our pigs can run and play and they are aware of where they put their bodies instead of plopping down.
We feed a small amount (2-4c per pig, per day) of feed in addition to their pasture grasses and weeds (their favorite thing is duck weed from around the pond). After farrowing we give the mamas warming oats for added carbs, lactation support and to warm their core after birth. We also give them Calcium rich Chaffhaye, along with nutrient packed Blackstrap Molasses in their water.
​This gives them what their bodies need during that stage of life.
Our pigs are NOT loaded up with chemical de-wormers, and yes, they do manage a NORMAL worm load. It is impossible and unwarranted to eliminate all worms from pigs. We employ the anti-parasitic benefits of Black Walnut and other vermifuge herbs as needed. A pig that can't handle a normal worm load shouldn't be reproducing and passing that weakness onto offspring. We feel very strongly about not breeding weak animals. 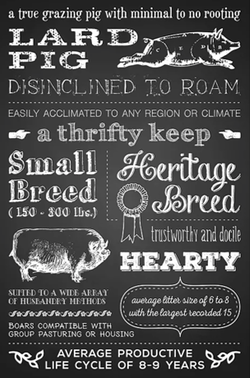 A heritage breed from New Zealand once near extinction, Kunekues are now growing in number and gaining popularity among small farms, in sustainable farming systems, in permaculture designs, etc.
​
Kunekune pigs are unique in that they are relatively small, not prone to root or roam, typically extremely docile in temperament, and suitable for small acreage and homesteads.

Known as the "grazing pig," Kunekunes are extremely efficient on grass and hay with little need for supplemental feed. Kitchen and garden scraps help to fill in any gaps. Feeding corn or soy may make them too fat and will change their fatty acid profile. 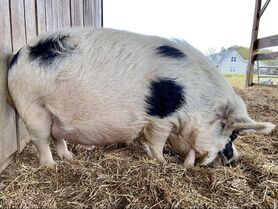 Tapeka/Ru X Mahia Love/Tapeka
DOB: 11/19/18
3.2%
High White/Brown, Double Wattles (lost one)
Hilda is our pretty high-white girl. With lineage from the West Coast, she thinks she's something special, and SHE IS! 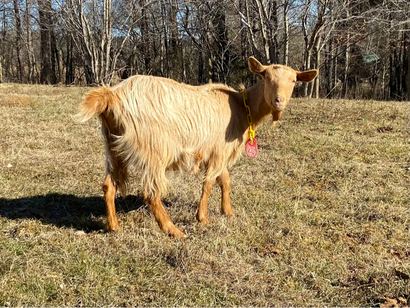 Tapeka/Mahia Love X Tonganui/Wilson's Gina
DOB: 2/1/21
COI: 4.1%
Tri-color (B), Double Wattles (lost one)
Molly is a Hilda/Hickory daughter and her flashy color isn't the only good thing about her! She is showing excellent growth, a proportionate body, and great foraging ability. She’s a head-turner, for sure. 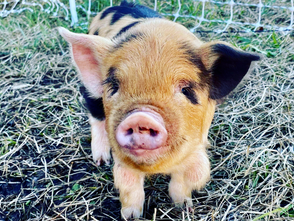 BH Rebecca Gina/Andrew X BH Tutaki/Kereopa
DOB: 12/18/21
​COI:
Ginger/Black, Double Wattles
We sold her mama pregnant and just had to have this girl back. She’s the best of Paprika and Tex and the chillest little thing ever. 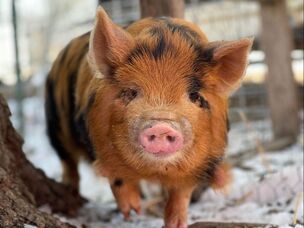 Boris/BH Rebecca Gina X Momona/Whakanui
DOB: 12/12/21
Ginger/Black, Double Wattles
Clyde is large and in charge but his personality is as sweet as pie! Could he be the perfect boar?! 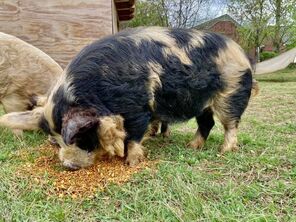 BH Tutaki/Jenny X Kereopa/Boris
DOB: 5/15/2019
Black/White, Double Wattles
Tex is a love bug, for sure! Appropriately named, this sweet guy is straight from Texas. The first time I saw his pic when considering piglets, I nicknamed him "Mr. Floppy Ears." His ears aren't the only thing I like about him, though. He has over all good looks, with good proportions and strength.

Whakanui/Tarutaru X Tapeka/Andrew
DOB: 10/02/2019
Ginger/Tri (Tapeka trait), Double Wattles
The original Popcorn Sutton was a moonshiner in the mountains of North Carolina, so why not name this NC born and bred rebel after him? Popcorn has the curly hair trait and has already made some really pretty babies for us. He will be our sole herd sire for a bit, while we are adjusting to some major changes on the farm. 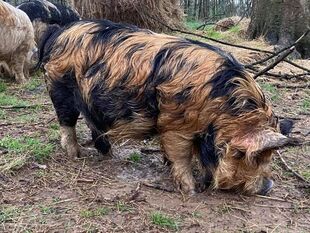 Mahia Love/Trish X Jenny/Andrew
DOB: 03/09/2020
Ginger/Black, Double Wattles
Our homegrown boar out of Maegan and Chestnut has that short, boxy build I love, and a round head/face and nice feet. He is an improved version of his dad plus he carries his mom's size so we had to keep him! I need to take a better more current pic, but you know... always chores to do.
Pigs For Sale